December 2013 saw the birth of the Anti-Sexual Harassment Act or ASH as it has come to be known in corporate parlance. With the government now recognising harassment of employees in the workplace as a crime, every organisation began to focus on calibrating their internal processes for channelizing any reported incidents. Every organisation with more than 10 employees has to form an Internal Complaints Committee (ICC) as stipulated by the ASH Act – the committee would be nominated by the Head of Human Resources and have a Senior Woman employee as its Head. It would also comprise 50% of women members with one member of an NGO to ensure that the committee remains unbiased in its judgement.

“However, the story of ASH did not begin here!!” states one of our senior most experts. She is correct!! The Vishaka Guidelines was a mandate for companies – Forming ICC, Complaint Handling and Redressal Mechanism was not a new thing. Companies have been following this for over 13 years now. 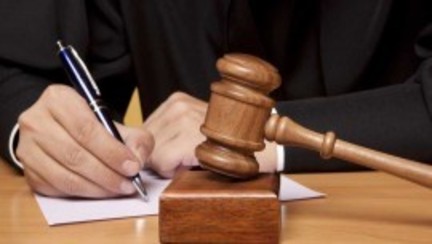 Its how far we have reached, with this Act, that is to be noted. Employers and employees cannot escape that this is a reality they are to face at the workplace. Leaders who are focused on getting the best from their employees and protecting themselves, are keen on getting onboard with ASH.

However, many lag behind.

Employer emotions swing between denial of these issues to being extremely wary. Many of our experts recounted moments of being told that they wouldn’t want to overdo the learning on the Act, especially since it could lead to mis-use.

Facts completely contradict that. Very rarely is a case of Sexual Harassment a prank or a game of revenge.

We asked our experts “Has reporting increased?” They responded with a confident ‘Yes’ – Therefore, we can be sure that women know that there is a forum for the issues to be heard, however, this may be different for women working in smaller cities.

Deterrents like lack of anonymity, knowing the repercussions faced by other women who raised complaints and the fear of victimisation, both at work and outside, continue to pressure them to not act on the issue, sooner.

Our interaction with trainers in the field, tell us stories of legal protection and support being given to the respondent exclusively.

The question now is ‘Why hasn’t the DNA of these organisations changed with many issues looming on the matter?’ The answer lies in understanding how organisations view this in reality.

The Internal Complaints Committee of many organisations seem to be inadequate in many ways. Lack of visibility within the organisation to complacency seems to be a matter of deep concern. ICC members are encouraged, by our experts, to conduct survey to understand what is the underlying issue for non-reporting, enrol for training as well as utilise the external member in a more efficient manner. Therefore, helping employees ‘Prohibit, Prevent and Redress’ the issue in an effective manner.

Feeling hopeless?? Older organisations have given us a ray hope in the matter. 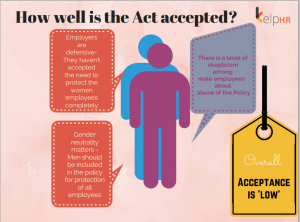 Having established this as an important employee policy, e-learning programs, classroom trainings, employee feats that encourage open Q&A’s and talkshows, theatrical performances lead the way. Encouraging a culture of openness and tying the employee policies to the values of the organisation is the way to re-affirm the role and priority given by the Top Management to the issue of Prevention of Sexual Harassment at the Workplace.

“Not only conducting these training programs, but in general, encouraging the employees to voice out their views on the other policies, will help them overcome cultural/habitual tendencies to suppress issues.” noted another expert as she shared her knowledge on the issue.

The next phase for the Act involves, undoubtedly, ‘Gender Neutrality’. Not only will this help in increasing the acceptance levels at organisations, but will give protection to men, who know that a complaint made on the matter today, is not given any importance.

Many trainers and legal experts have guided companies to think and organise themselves in this manner already, therefore, creating an atmosphere of openness for all employees.

Some best practices that have paved the path, from industries like Banking and Finance, IT and ITeS, are:

This is an evidence that for Corporate India, change is here to stay.

“Believe in Change, Believe it will happen”

5 Tips to encourage employees to use EAP/Counseling services