Leadership Lessons from the wild

The author Gokul Santhanam is a Senior Vice President – HR at MphasiS. From his recent visit to the Ranthambore Tiger Reserves in Rajasthan, India, he shares a few of the leadership lessons that he observed from the wilderness and nature.

Wilderness Learning 1:
Happened to see a water body in the middle of the jungle where different animals were seen drinking water. There were different types of deer, monkeys, peacocks and so many varieties of birds. This is the same place where the tigers, leopards, boars and other carnivores also come to drink water. The forest is for all. Animals may mark their territories but they still share the common resources. They fight for survival but they know what not to fight for. 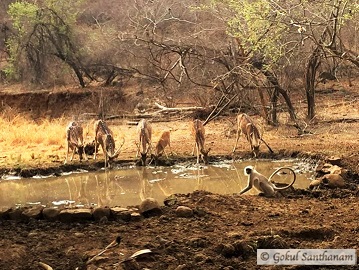 Unlike us humans fighting for water, dam, electricity and every natural resource. We have our territories too but constantly wants to go beyond. When will we learn to co-exist? I learnt that deer and monkeys are pals. Monkeys pluck leaves from high trees and drop fruits for the deer to eat. While monkeys have a good line of sight from top of the tree, deer have a good ability to smell. They warn each other of any predators! There is this joke about a man wearing his sports shoes when a tiger chases a group of friends. One of them says ” do you think you can outrun the tiger”…our friend replied, “No, but as long as I can outrun one of you that is enough”. Co-existence

Learning 2:
This one is not from wilderness. 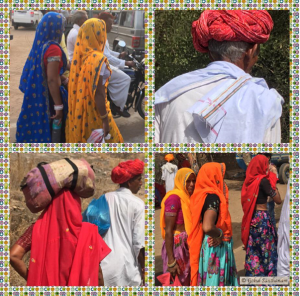 This is about the colourful men and women of Rajasthan. Every person you see on the road is dressed in bright colours: yellow, orange, pink, red, green or blue. Absolutely bright and sometimes similar. A local revealed the reason(s)…well there are two of them. Firstly, the state mostly consists of dry lands and deserts. Bright colour helps identify people amongst the sands and prevents them from being camouflaged. Secondly, life in the deserts is not easy. Such colours brighten up their hard lives and make them cheerful. This is indeed true…just looking at these colourful Rajasthani men and women cheers you up. When you meet them, say “Khamaghani” (not “come again honey” though it is a way by which I remember the word) which is equivalent to hello and actually means “Can I talk?”.

Wilderness Learning 3:
The biggest threat faced by the tigers is poachers. I was surprised to learn that the royals of Rajasthan and their hunting is in a way responsible for this situation. What’s surprising about this? Well the reason is because the royals stopped hunting or were stopped from hunting. Here you go. The rulers were protecting the animals by hunting them. The rulers had some ground rules: 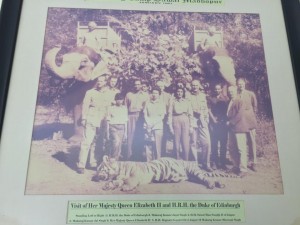 (1) They will not hunt during monsoon which is the mating period.
(2) they would hunt only the male and not the female who are more important for reproduction.
(3) they would generally not hunt more than a couple of animals during their hunting expeditions and such expeditions are spread out and less in number
(4) their hunting helped maintain the ecological balance.
(5) most importantly, other than the royal’s no one else is allowed to hunt. If someone violates, they are punished severely and in some cases asked to manage a couple of royal elephants for a year. Feeding the elephant will make them poor and hence people would not violate the hunting rule. The day the royals stopped hunting and poachers started hunting for commercial gains. Interesting fact! Here is a picture of Rajmatha Gayathri Devi when she accompanied Queen Elizabeth II on a hunting expedition when she visited India in 1961. The tiger that was killed is symbolic. If a poacher had accompanied the queen, you would see at least a dozen tigers or more. 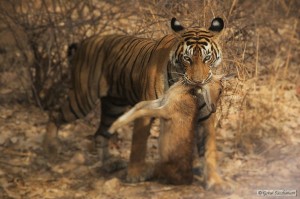 Another philosophical thought. Happened to see a tiger hunt a fawn and capture the process partly as a video. The thought that ran through my mind…”why should the tiger kill a fawn and not a bigger deer. The tiger is a mother hunting for her cubs and why did she kill another mother’s kid”. I understood that these are animals. They don’t have such rules of engagement. However, animals hunt only for their need and not more. Her need was only so much. If she had killed a bigger deer, they would have eaten the prey over a period of time and wouldn’t hunt a new animal until the previous hunt has been devoured. In his book Buddha, Osamu Tezuka says humans hunt for joy whereas animals hunt based on need. A tiger that has had his meal will not kill another animal until he is hungry again. If a smaller animal sees a tiger having his food, he is relieved and wouldn’t mind grazing nearby because he knows that he will not be killed. Wonder if Tigers had a refrigerator to store food, will they start acting like humans?

Wilderness Learning 5:
What I learnt from the tiger. The tiger is the centre of attraction at Ranthambore. Everyone comes there to see the tigers and only the lucky ones get to see them (I was lucky on all days and managed to see them in different zones and different moods). In the small waterhole while the tiger is relaxing, some 50 camera shutters click constantly and the jeep engines are always accelerating. People follow the tiger wherever she goes. The tiger knows this but he doesn’t care. 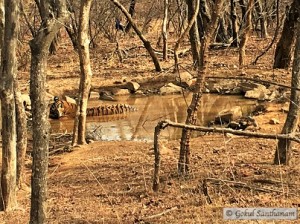 Few sambar deer arrive there to drink the water and see the tiger. First they warn each other with a unique warning sound. Next they make a sound to request the tiger to allow them to drink water. The tiger gives them a stern look and relaxes himself further into the water. A message to the deer that he is there to relax and he cannot be disturbed. The deer wait for some time and then leave. You may think the tiger is inhumane, err…intigerane(!) but it is important for the tiger to cool itself in the hot summer. If he has to make way for every group of animal, he will never be able to get into the water. This pattern is visible in several instances. Even when she is about to hunt, she doesn’t get distracted by people or the vehicle.
The tiger clearly tells us that
(1) if you decide to do something, no matter what happens, don’t lose your focus or get distracted.
(2) Establish your authority when you have to.
(3) don’t say yes when you have to say no. You can also learn a thing or two from the deer. Coming up next.

Wilderness Learning 6:
What I learnt from the deer. The deer is always on high alert. They panic even at the slightest sound. If a vehicle approaches they look at it with caution and start running when the vehicle gets closer.

Even while they are grazing, they keep looking around to see if there is a danger. Of all the other animals in the jungle, I found the deer as the one who was most likely to be a prey of the predators in this jungle. All other animals/birds were smaller in size or stronger. The tigers and leopards would prefer to hunt the deer who is their soft target. The deer have good ability to smell but their eyesight isn’t great. They have a friend in monkeys who would always be found with the deer and would alert them of any approaching predator. The deer teaches us to understand and acknowledge our weakness. Find the right partner who can complement your weakness and help you succeed/survive. Be alert at all times as the predators are always waiting for you to relax your guard.

Wilderness Learning 7:
I went to Ranthambore Tiger Reserve to see tigers. Obviously…you don’t go to a Chinese restaurant to have masala dosa. 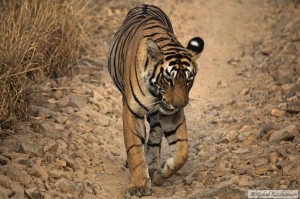 I understood from many people that sighting a tiger is rare and that there are people who have tried the safari for four consecutive days and yet returned disappointed because they could not get a glimpse of the tiger. 10min into the jungle, I happened to see the tiger within 15feet distance from where I was. I was lucky to see the tiger during all my 3 safaris. Infact I saw 5 different tigers and watched one of them hunt which is an even more rare sighting. 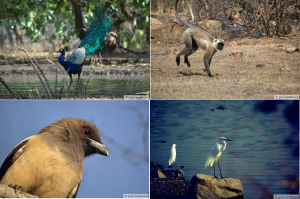 What would have happened, if I didn’t get to see the tiger in all my 3 visits? Would I have been upset? Will I try one more safari or would I have left Ranthambore never to return? When I think back, I realise that it was not the tiger that excited me. It was the Safari that excited me. I saw Sambars, Cheetals, Peacocks, Crocodiles, Snakes, Mongoose, Rabbits, Wild Boars, Monitor Lizard, different type of monkeys and several other varieties of birds. It is like, I also saw Tigers. Even if I had not seen the Tigers, I would have still been happy watching the other animals. The animals are a part of the jungle but even without the animals the jungle would still be there. If I hadn’t gotten to see any of these animals, I would have still been happy to have seen the different shades of the jungle, the trees, the grasses, the rocks and the water bodies. People close their eyes and listen to songs while travelling…. isn’t looking out of the window a part of travel? It is better to travel well than to arrive says Buddha. Happiness is a journey and not a destination. There is learning everywhere, there is happiness everywhere…be happy…enjoy life