The impact of asking personal questions at work 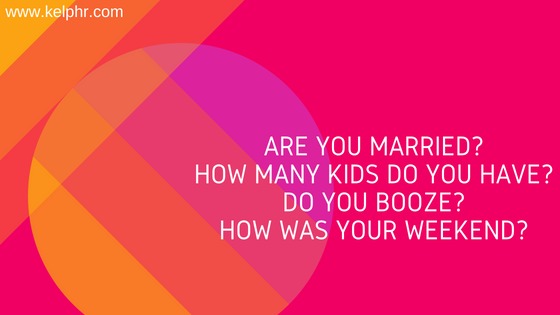 When employers ask candidates or employees personal questions, it blurs the lines of professionalism and can potentially lead to unconscious bias and discrimination. World over, organizations are slowly beginning to comprehend the negative impact of asking personal questions at work.

Countries like the US and UK have made it illegal for employers to ask candidates and employees personal questions at interviews or at work. Asking questions about age, national origin, marital status, race, gender, sexual orientation, disability, pregnancy status and religion is illegal in many forward-looking countries.

Unfortunately, across the world, employers still ask candidates and employees invasive personal questions although it is neither professional nor required for assessing skills. It only has a negative impact on bias and discrimination.

Here are some of the commonly asked personal questions at work.

Employers often ask female candidates and female employees about their marriage plans and relocation due to marriage. They take the liberty to ask female employees her plans to start a family. Female employees on maternity leave are asked to clarify their intention to continue working. And, working mothers wanting career advancements are questioned on her support systems for childcare.

Such deeply personal questions are not posed to male employees.

They are irrelevant to the skills required for the job and eventually makes objective decision making hard.

Studies1 have shown that when female employees are provided flexibility they are more engaged and are stronger advocates of the organization compared to men. Yet, due to the existing bias against marriage and pregnancy, it is women and especially working mothers who are questioned about their commitment to work and dealt with a harsh motherhood penalty2. Women land up being paid lesser, provided reduced growth opportunities and find fewer mentors. Eventually, the organization lands up losing precious talent due to unconscious bias and discrimination.

Women applying for typically male bastion jobs are questioned on the personal front as well. A female employee is often asked to share what her family thinks of her career decisions and if they support her.

This is because our gender stereotypes which begin in childhood is deeply ingrained. We stereotype men as protectors and providers and women as being communal and as caretakers. This stereotype extends into our decision making at work as well and makes us evaluate men and women differently.

Take the case study of Heidi Roizen, a successful Silicon Valley VC. Her story was presented by Professor Frank Flynn3 to his class. Half the class received the case study with Heidi’s original name retained while for the other students Heidi’s name in the case study was changed to ‘Howard’. The students rated Heidi and Howard as equally competent but liked Howard and not Heidi. Unfortunately, there exists a significant negative correlation between power and success only for women.

To avoid the unconscious bias against gender, companies like Applied offer de-biasing recruitment solutions. They anonymize applications received and share it with teams for assessment in a randomized order. They spot and remove gendered language from Job Descriptions that might appeal to only a specific gender.

Employers do not openly ask questions on race, caste, religious beliefs etc. to candidates or employees. Yet, these details are most often revealed through the name and could lead to bias and discrimination.

When decision makers interact with people resembling themselves (ex. school, college), they may become inclined to have a favourable decision towards them. This is called ‘affinity bias’.

Companies like pymetrics counter this by providing predictive hiring practices through gameplay. They use neuroscience games and bias-free AI to predict the match of people with jobs where they will perform their best. pymetrics assesses a candidate’s cognitive and emotional makeup so that recruitment gets rid of possible unconscious bias.

When decision makers and interviewers delve into the personal lives of candidates and employees, there is a possibility of empathy overtaking merit in decision making. An empathetic hiring manager who decides to give a job to a disabled disadvantaged candidate tries to act like God and overlooks the actual need of the organization.

An employer who decides to reject a professional only because of her sexual orientation is hindering his company from hiring the best talent.

By asking personal questions, employers run a legal and reputational risk that they should be concerned about. Not only do they set themselves up for failure and lose opportunities to hire and retain the best skilled professional due to unconscious bias; they also miss out on building a dynamic and diverse workforce. Candidates and employees lose growth opportunities and begin to maintain a social and emotional distance from their managers and the organization. Asking personal questions at work has a negative impact.

The impact of smoking breaks on Inclusion