Work Culture – Who sets the tone? 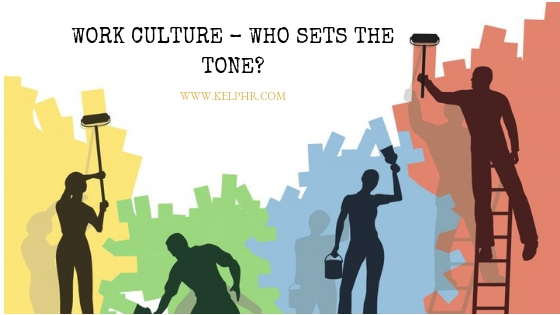 Just as individuals have distinct personalities, so do organizations. Each organization has its unique work culture. ‘Who’ sets the tone for the work culture is crucial as it impacts the organization’s ability to attract, engage, retain top talent and its potential to thrive.

Google has set the benchmark for the most enviable work culture of success and employee happiness. Organizations that attempt to copy Google’s secret sauce often land up mimicking its infrastructure and benefits but are unable to capture its DNA –  its unique work culture. Google’s work culture reflects the values it upholds; the policies, practices, and communication; the beliefs, behaviors and attitudes of its employees through all levels – from the CEO to the entry-level position. Their work culture reflects who they are. It speaks volumes about how they get work done.

Like Google, the Tata group stands apart. The Tata name has become synonymous with integrity. Just like how the Pikes Place Fish Market is akin to ‘fun at work’. Their positive work culture describes them. Whether it is Google, the Tata’s or the Pikes Place Fish Market, people throng to work at such organizations. Mainly because the leaders of these organizations have built a great work culture that people want to be part of.

The power of a company’s work culture is so high that it pulls everyone into its fold. For instance, McKinsey is staffed with those who have excellent pedigrees. McKinsey employees normally are impeccably dressed and they clearly mean business. This work culture subtly influences the behavior of new joiners to dress immaculately, to talk and behave in a similar manner in order to blend in and grow.

Consider ‘Hootsuite’, which is known for its innovative work culture. Their recent company-wide initiative was ‘#randomcoffee’, which enabled employees to meet those outside their departments over coffee in a blind-date style. Such initiatives are bound to make Hootsuite employees realize that trying out new ideas is encouraged within the company. They are likely to be creative and innovate in such a work culture.

Unfortunately, a company’s work culture when toxic, spreads equally fast. When employees belong to an environment where they see others break rules and get away with it, they do so too.

The leaders, managers and decision makers at Uber tolerated sexism and harassment. This spread a toxic work culture. Thanks to Susan Fowler’s blog post, Uber’s work culture came to the attention of the world and several changes were implemented in the company beginning with the crucial change of leadership.

There are other companies like Uber where employees watch their bosses and copy their behavior. When bosses comment on the good looks of a new hire, those watching think it is fine to do so as well.

Not only new recruits, but existing employees also are influenced by what they see around them. When they overhear colleagues using sexual undertones in conversations, they get the message that unprofessional conduct is accepted in the workplace. Similarly, when bosses swear in front of team members, employees imitate such behavior when their turn comes.

As we know, actions speak louder than words. Employees take cues from each other, from the actions and decisions of their leaders, from the processes, practices, and communication within the company. They absorb it and toe the line, eventually promoting the organization’s work culture.

Leaders, employees, policies, processes, communication, and several other variables create a company’s work culture. Although employees at all levels promote it and are equally responsible for it, the tone of the work culture is set by the organization’s leaders and its decision makers.

Setting the tone for an great work culture is a long process. Leaders and decision-makers are in the position to inspire employees to speak the common language of work culture. Rigorously guarding the work culture of the company involves significant effort. The sustained focus and effort of leaders and decision makers is essential. Else as Uber has shown, in a matter of a few minutes a company’s culture can be destroyed for the entire world to witness.

An organization’s work culture directly impacts its ability to attract, engage and retain top talent. A productive, creative and engaged workforce can lead an organization to thrive even in a turbulent marketplace. It is the leaders and the decision makers who can ensure that the organization reaps these dividends by setting the tone of the work culture.

The impact of smoking breaks on Inclusion