Counselling refers to a process that psychologically empowers individuals to gain control on their mental health or well-being. Counselling increases self-awareness and a sense of well-being and also an understanding of the resources that he or she can use.

Anyone who is struggling with a personal concern can seek counselling.

Most common are the below:

Indicators: An employee is generally irritable, nervous, withdrawn and had body aches and insomnia. Insomnia can lead to poor decision making or impaired judgement and poor concentration. Having angry outbursts at work, difficulty in getting along with bosses or peers.

Statistics: 6 % of the workforce population reports depression. Analysis of the WHO questionnaire reports that people who had symptoms of depression reported 27 lost days of work.

Statistics: Employees with ADHD lose 22 days of work every year, they are 18 times more likely to be disciplined for bad behaviour and 2 to 4 times likely to be terminated from their jobs.

Usage of drug or alcohol to cope with Insomnia, to help with anxiety.

Schizophrenia: Schizophrenia is characterised by thoughts or experiences that seem out of touch with reality, disorganised speech or behaviour and decreased participation in daily activities are some of the indicators of this disorder. Difficulty with concentration and memory may also be present.

Delusions: A person with delusions cannot tell the difference between what is real and what is imagined. They firmly believe that it is true and this might impact the work environment. Eg; An employee may say ‘My peer next to me is trying to get me out of my job or is trying to put me down’ without any evidence.

Hallucinations: Hallucination is a perception of having seen, heard, touched, tasted or smelled something that wasn’t actually there. For example, you might hear a voice that no one else in the room can hear or see an image that isn’t real.

Paranoia: Paranoia is an unrealistic distrust of others or a feeling of being persecuted. Extreme degrees may be a sign of mental illness. Eg; the feeling that you’re being threatened in some way, such as people watching you or acting against you, even though there’s no proof that it’s true.

Anorexia Nervosa: A disorder causing people to obsess about weight and what they eat.

Bulemia Nervosa: A disorder caused by a person eating large quantities, but finally throws up.

Binge Eating: A disorder caused by a person eating large quantity of food uncontrollably and with a feeling of guilt. It happens periodically.

A mental health assessment gives your doctor a complete picture of your emotional state. It also looks at how well you are able to think, reason, and remember (cognitive functioning). There are online self-assessments resources available on the internet. But first check with the counsellor and then do this. It is always better for the counsellor to do the assessment first as these tools may create or increase negative feelings.

Counselling even today in most regions of India is considered as a taboo and people don’t understand the concept of mental illness. It is either lack of awareness, fear or a matter of shame for people who do not want to seek counselling guidance as a treatment method for their mental illness.

Organizations can sensitize their employees on counselling during floor walks. This is what was followed by one of the organizations where Kannan was the counsellor.

Some important benefits that Organizations can reap from Employee Assistance Program could be:

There are no specific laws for counselling. The Mental Healthcare Act (MHCA), 2017, is enacted with an aim to promote and protect the rights of and improve the care and treatment for people affected by mental illness. It ensures that these persons have a right to live life with dignity by not being discriminated against or harassed.

There are a few Act that have embedded counselling as a part.

The Protection of Children from Sexual Offences (POCSO) Act, 2012 – The role of Counsellors and the Counselling of the abused child and their family is spelt out

Sexual Harassment of Women at Workplace (Prevention, Prohibition and Redressal) Act, 2013 – The Act specifies certain Recommendations that can be given by the organization’s Internal Committee in the absence of service rules and counselling is one of them.

The following factors should be considered while choosing your counsellors:

Experience of the Counsellor: If the counsellor has handled all kinds of mental health issues. share a little about your presenting issue and see how the therapist responds.

Confidentiality: It is very important to maintain the identity of the client during counselling

Rapport building: Is the counsellor having a sense of connection with the clients?

Continuing a therapy:  The counsellor may refer the client to another counsellor in the event of

As per the study of National Mental Heath Survey of India, 2015 – 16, which covered entire India, incidence of mental health disorders is 10.6. Substance disorder is high India.

As per the study of National Mental Health Survey of India, 2015 – 16, males in the age group of 30 – 49 years were the most affected. The prevalence of all disorders peak in this age group affecting work productivity, earning potential and quality of life. 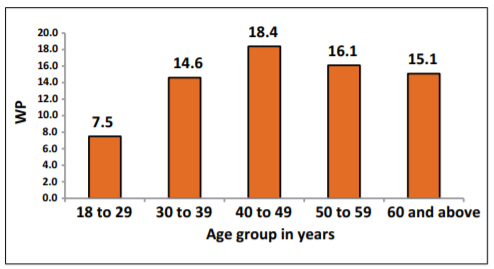 Prevalence of mental disorder by gender (%) 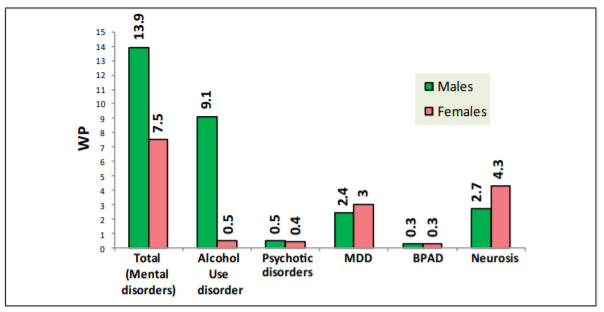 The total amount of illness is higher in the male population in comparison to the female population particularly Substance disorder, that is alcohol use disorder is high in men rather than women. The mood disorders and anxiety disorder which they called neurosis is high in women.

Even before it goes to the HR, the manager is in the forefront to notice any changes in the employees. Instead of stigmatising, pressurising or judging the person, the managers have to be empathetic and understand their perspective. A lot of times, there are reasons behind such behaviour. In case the employee, requires and is open to treatment, the employer has to help in providing assistance.

During this pandemic, there is a lot of uncertainties that we go through.  Some of us are with older parents or young children. We are worried that if we step out, we are going to make things worse for the people we love. This uncertainty gets to people and it makes them anxious. At the same time, they are not in a healthy relationship to start with. When they are caught up at homes like this, domestic violence, relationship problems or sibling rivals can increase.

It is important to maintain a routine. It gives a sense of normalcy. It gives you a control on things. Do some of the things you really enjoy doing. If sometimes, it is unbearable like domestic violence, then it has to be reported to the concerned authorities.

Employees can do the following:

The following can be done by employers:

Employers can organise online games, or zoom parties for all employees. Some employees miss their social interactions and this will keep them engaged.