Why ‘SHe-Box’ will get a thumbs up from the working women of India? 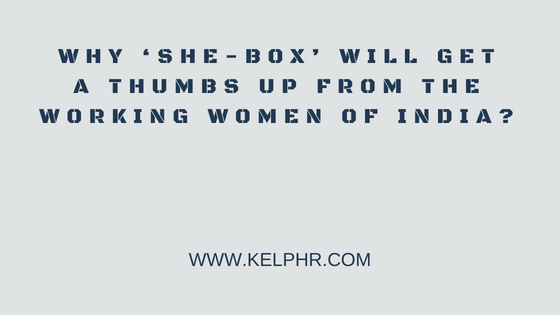 ‘SHe-Box’ can be the game-changer for a woman encountering sexual harassment at the workplace in India.

High profile cases of sexual harassment against women have always received significant attention world over and thereby probably a higher opportunity for fair redressal. But what about the plight of an ordinary woman, one for instance who has been subjected to sexual harassment by her manager in a small company of a non-descript town? The average Indian woman, typically one who is earning barely enough money to make ends meet, may probably not even be aware that she can complain against the perpetrator of this repugnant crime.

Which is why, when the Ministry for Women and Child Development (WCD) launched ‘SHe-Box’ this year, it presaged a beginning for a new and progressive era for women in the Indian workforce.

‘SHe-Box’ (sexual harassment electronic box) is an online complaint management system launched in in July 2017, specifically for documenting and redressing grievances on sexual harassment for female government employees. On 7th Nov 2017, ‘SHe-Box’ became particularly meaningful as its coverage was extended by the Ministry for WCD to female employees of the private sector as well. A female employee who is a victim of sexual harassment can raise a complaint on ‘SHe-Box’ either before or after raising it with their respective organisations’ Internal Committee (IC) or Local Committee (LC).

Why we at KelpHR give it a thumbs up?

Backed by years of experience in building awareness on Sexual Harassment, we at KelpHR believe that this is a commendable initiative taken by the Ministry of WCD which addresses a significant problem woman at work in India have faced for generations and continue to do so. Experience in the field has given us insight into ground realities and here is what we think are the few suggestions to improve the effectiveness of the ‘SHe-Box’ further.

This is how the ‘SHe-Box’ be made more effective

Validation of the mobile number field in terms of the number of digits that needs to be typed in; similarly validating the email address field for errors; or provisioning for the landline number of the company are smaller enhancements that the Ministry of WCD can make on the portal effortlessly.

Women in India are vulnerable to the fear of being ostracized socially when they complain against sexual harassment. They fear losing their indispensable financial income, they fear the backlash at the workplace and a lot more. The normal Indian woman has long been conditioned to quit the workplace rather than raise a complaint, a choice akin to the lesser of the two evils.

Such a woman who gathers the courage to complain about the harasser against all odds, must be assisted in all ways possible to receive due justice. We at KelpHR believe that ‘SHe-Box’ is a great initiative towards this end.